AKA: Why the Curtains are Blue.

Presented at the SAETA State Conference, May 7th 2018 at Immanuel College, Novar Gardens. 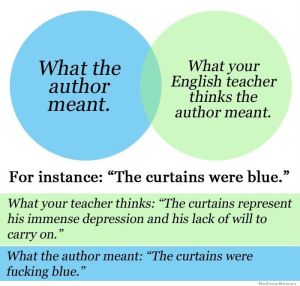 I love this meme. I think of it often when I’m in class attempting to make bored teenagers believe me when I say ‘Shrek is not about an ogre who abandons a swamp’ or ‘Cars is not about cars’ or ‘Tinker Tailor Soldier Spy is not about ‘spying’.’ As a new teacher to English, I knew that the message of the meme was wrong, that the curtains could represent his ‘immense depression and lack of will to carry on’. But I couldn’t explain how. Like many newbies to English teaching, I felt I didn’t really understand the basic ideas behind analysing literature or texts.

My presentation at the SAETA State Conference was a basic intro into the key ideas behind our discipline. It’s kind of like a ‘Philosophy of English Education 101’. It’s the session I wish I’d attended in my first year out. If you’re a newbie to teaching English, or you’ve ever wondered why we do what we do in English teaching in Australia, this is the blog post for you!

First up, here’s the PowerPoint and other resources from the presentation.

Plus: I’m currently doing my Masters (parttime, of course), and I’m looking to specialise in Middle School literacy … any feedback or ideas on this topic would be greatly appreciated! Have I got something wrong? Tell me! duffystirling@gmail.com

What makes an accomplished English student?

esides literacy (of course), to be successful in Literary Analysis, our students need:

The first is covered well by most English teachers from primary school onwards. Newbie teachers who are still not sure should check out English Textual Concepts website and Insight Publications. There’s a whole website covering them here: http://literary-devices.com/.

The second we are all trying to do by exposing our students to current events and unfamiliar ideas in our text choices. But it’s the students who are widely read and interested in the ideas of the world that do well in literary analysis.

The third is what this post is all about: getting our students (and ourselves) to understand how texts are constructed.

If you did your pre-service training in the last twenty years, you have probably been trained in  the constructivist approach to education, whether you know the terms or not. If the names Vygotsky and Piaget mean anything to you, then you probably have.

Prior theories of learning assumed that knowledge is transmitted from teacher to student; and arrived in the same state in the mind of the student. Constructivists believe that learning is influenced by experience, perception, culture and worldview. Learning something that is close to what you already know is easier than learning something completely different. There’s also a massive emphasis on students being active learners, in that they gain knowledge through exploration and active learning. Most of our ‘best practice’ principles, such as student-centred learning, project based and inquiry based learning etc. come from the constructivist model of education.

In terms of teaching English, understand that modern English teaching in Australia is constructivist. The key points are:

The idea that authors make deliberate choices when constructing texts is sometimes hard for students to get their head around. After all, a lot of kids when they write their texts just ramble along until they’ve met the word count. A great assignment for students is to write a text, then do a literary analysis on their own work: did they use first or third person, and why. Did they write informally or formally, and why. After a while they can come to understand that they did make choices; and that in future they should plan their writing so they’re making better ones!

Another way for them to get the idea that authors make deliberate choices is to look at texts where the author is documented clearly stating their intentions. For example George Orwell has been pretty clear about his intentions in 1984 and Animal Farm; Steve McQueen also clearly states what his intentions were for 12 Years a Slave, in multiple interviews.

You can use the metaphor of a house being constructed (e.g. the foundation, the studs, the bricks) to show how different choices in elements leads to different styles of house.

You can talk about cultural conventions through assignments which explore archetypes; e.g. look at archetypical characters (the hero, the mentor, and so on), or archetypical narrative structures like the Hero’s journey. Website TvTropes.org tries to track these cultural conventions, especially as used in popular culture (consider the ‘token black guy’ convention in teen movies, or the ‘Matthew McConaughey leaning’ convention in romantic comedies).

The concept of Intertextuality comes in here. Philosopher Julie Kristeva proposed that “any text is the absorption and transformation of another.” Basically, intertextuality is the idea that, because all texts are so heavily influenced by what came before, they are effectively re-assemblies of previous texts. Sarah Chamber’s 2017 presentation on Intertextuality was a great place to start for teaching this concept – a handout can be found here: https://www.aate.org.au/documents/item/1315

English education is all about examining literature and texts to identify how they make meaning. For Example, the purpose could be:

Different types of texts intend to achieve different purposes; for example narratives are usually written to entertain or explore ideas; advertisements are usually created to influence an audience.

Often texts achieve meaning in a subversive way: the meaning is ‘suggested’ or ‘hidden’.

The ‘hidden meaning’ is called subtext. The idea of subtext is popularly compared to icebergs: on the surface a text might appear to be silly and superficial; but the meanings are extensive and hidden underneath.

Literary analysis involves looking ‘beyond the text’ to see the hidden meanings.

The easiest way I’ve found to start students on the idea of subtext is to talk about themes. Now, I found it really hard at first to get a solid, concrete definition of ‘theme’; it seemed everyone online had a slightly different understanding. This is the definition of theme I’ve ended up with:

The key point here is that themes are the big ideas about what it means to ‘be’. I treat the short phrase (e.g. ‘growing up’ ‘resilience’) as the ‘theme’. Other educators see this as the ‘topic’ or ‘subject’, with a short statement which establishes a point of view as being the ‘theme’ of a novel. Instead, I treat that ‘short statement’ as a ‘message’ or ‘lesson’, or ‘moral’:

Napthine and Tulloh’s explanation of this in Insight Publication’s Year 12 English skills is particularly good (I believe this text isn’t available anymore, but I’m sure it’s reflected in some of the other Insight texts). Here are a few examples from this book:

Each time I have students read or view a text, I make sure they suggest the theme and contention.

Louise Rosenblatt is the godmother of modern English teaching. In her 1938 book ‘Literature as Exploration’, she posited the idea that a reader creates meaning every time they read a book; that a reader (an audience) is essential to the creation of meaning. She is immensely quotable:

“A reader makes a poem as he reads. He does not see an unalterable meaning that lies within the text. He creates meaning from the confrontation.”

‘Each individual reader, in essence, creates the work anew each time it is read. Reader’s engage with a text as a transaction. The reading of a text is an EVENT in which the reader gives the text life. Each reader has an individual experience with a text.’

Traditionally in English, teachers would train students to regurgitate the traditionally established interpretations of a text. After Rosenblatt’s Reader Response Theory (also called Transactional Theory), the importance of the reader in the creation of meaning was established. Instead of teaching an established meaning, or what the author intended, teachers should foster students’ trust in their own interpretation.

Rosenblatt’s work is absolutely fascinating, and I’ve got a copy of the book on order. Find more here:

Death of the Author

Well, Rosenblatt started something. By the 60s, the idea of authors as the true holders of their text’s meaning ended up, well, assassinated: 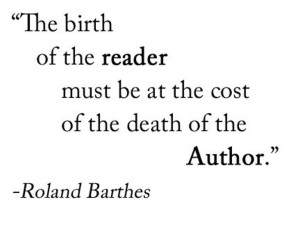 Roland Barthes’ 1967 essay ‘La mort de l’auteur’ (The Death of the Author) firmly moved the authority of meaning out of the hands of a text’s author:

“To give a text an Author is to impose a limit on that text, to furnish it with a final signified, to close the writing […] [However] by refusing to assign a ‘secret,’ an ultimate meaning, to the text … liberates  [us, because] to refuse to fix meaning is, in the end, to refuse God and his hypostases–reason, science, law.”
Roland Barthes

Basically, he was arguing that examining a text by considering the author’s historical context, their political views, their psychology and so on, was pointless. Like Rosenblatt he put the burden of meaning in the reader. “To give a text an author” and assign a single, corresponding interpretation to it “is to impose a limit on that text”. Barthes didn’t like the idea that once a text is finished by an author, it is ‘done’ or ‘fixed’.

This is one of my favourite concepts in philosophy. It’s worth reading up on. It’s also worth exposing students to this concept.

Additional Readings for Death of the Author:

So for literary analysis, Reader Response Theory and the Death of the Author mean one thing:

So, yeah kids, what you think the text means is as real as what the author meant. But don’t get too excited. Your interpretation must be plausible:

In other words, students have to prove their interpretation. I usually tell them that their opinion doesn’t matter; their informed opinion does. Avoid the fart in the wind tunnel:

For more on combatting the ‘I’m entitled to my opinion’ logical fallacy, check out Wikipedia’s page on it.

These philosophical approaches promote the idea of the reader as creator of meaning. That’s led to literary criticism, whereby texts can be viewed through ‘lenses’ to examine how power and oppression is created and perpetuated through texts; e.g. through a ‘feminist’ lens or a ‘Marxist’ (class systems) lens.

The new SACE has critical perspectives in Stage 2 Literary Studies. I’m hoping to work some into my future Year 11 or 12 classes but as yet my knowledge is a bit thin.

But anyway, Tim Gillespie’s book Doing Literary Criticism is the bible: it’s written specifically for high school English teachers. He discusses the same literary theories on this page in the intro.

The Curtains are Blue

So I had the answer to why the blue curtains DO represent his immense depression and lack of will to carry on, even if the author didn’t intend it to do so. I teach my senior students about Death of the Author and the blue curtains, and I’m proud to say they get it.

More on why the Curtains are Blue:

So, what are we doing when we do analysis?

Analysis is when we pull something apart and look at how the separate pieces fit together to understand how something works.

This is true in science, in maths, and anywhere ‘analysis’ is used.

Literary Analysis is when we deconstruct texts and look at how textual elements are used to create meaning.

When a student or a literary professor is writing a response to a text, they are arguing to prove their interpretation is plausible. They do this by providing textual elements, and the way they are assembled, i.e. the deliberate choices made by the author, as evidence. In this way, Literary analysis is really pretty much a persuasive text.

I’ve been working on various ways of getting students to do this. I’ve got to do some thinking around how I’ve been approaching it (the ‘TIEE’ approach I mentioned at the presentation), so there’ll be a future blog post on it.

The takeaway points, dear newbie English teachers, are these:

Hope you enjoy the presentation!